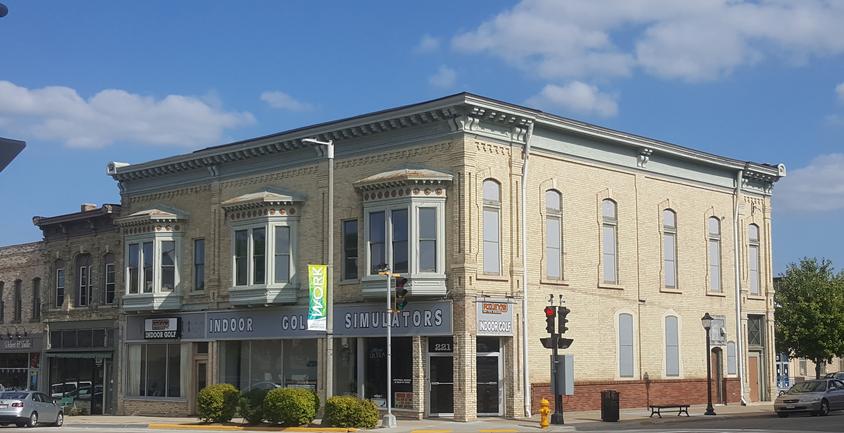 In the summer of 2008, I was between renters in one of my properties.  I had a net in my backyard that I would hit into for practice.  The city tournament was coming up and they were calling for rain all week.  I decided to take down my net and cage and move it indoors at my vacant commercial building.

I received a phone call from a friend and when I told him I was hitting golf balls he said "where? It's lightning outside".  I explained and he stopped down.  We talked briefly about how cool it would be in Janesville had a place where the public could go and play golf indoors on rainy days or during the winter months.  My wheels started turning and that night I did some research on golf simulators.

After a couple weeks of searching, we bought a very cheap version .   We realized that the cheap one that we bought would not be good for average players or commercial use since you had to change settings all the time. You would hit off a black rubber mat that didn't feel good if you hit it "fat".  We located a simulator we thought was a great deal as it was a very popular brand.  It was Full Swing golf simulator.  We purchased the simulator online and set up the trip to go get it.

Lora and I loaded up the Trailblazer and trailer and figured we would drive to Ohio, load up in the morning and drive back that night.  Not happening. The load was way too heavy for the trailer and so we had to rent a U-Haul, load the pieces into that, stay overnight and then drive home separately.  We still talk about that weekend.

We set up the new simulator and gave out my cell phone number to people since we hadn't even set up a business phone yet.  We left the original simulator set up with the cage and net as well to start with but removed that after a bit. November 1st was our target date to open.  Our hours were 12 - 5pm Saturday and Sunday only.  Two weekends went by and no one came in....and then my cell phone rang.  It was Eric Blanca and he asked if we were open yet.  He was our first customer to come in and play.  The business was now officially started.

In 2010, we moved our hours to be 8am-5pm Saturday and Sundays, but by reservation only.  We then opened it up during the week days for the same time frame and by reservation only.  My Dad would cover the store during the week days while Lora and I were working our full time jobs and myself or Lora would cover the weekend shifts.

In 2014, we upgraded our simulator software. We applied for a Class B liquor license and were approved.  The next season our business really took off with the combination of both of these upgrades.  Our hours switched to 9am-9PM seven days a week by reservation only.

In 2015, we added in Ion2 cameras and our simulator became so real that it was a great teaching tool for myself and word was getting around.  I had always said that I wish I had more room in here to have two of this brand of simulators so we could accommodate more players.   A construction friend of mine said, "why don't you remove the show cases up front and change the front of the building?"  I started measuring to see if we would have the room that we needed.

In 2017, and the end of our season (April) we pulled the permits to make this happen. and also upgraded all electrical. In September, we started installing our second simulator and are now in a place I never thought we would be years ago.  Our hours now have changed as well.  We are open for reservations 9am -11pm seven days a week!

In 2018, we purchased another building next door to our current location and expanded our footprint to 5,ooo square feet.  We added another simulator bringing us upto 3 simulators.  With the new added space we have made the bar area bigger and added tables to hang out around after your game of golf or before your games.  This was a huge move in the right direction for us.

In 2019,  we added another simulator bringing us upto 4 simulators.  This will allow us to run bigger tournaments now and offer more tee times.